Today is International Dog Biscuit Appreciation Day. God wot, I hear you say. How come this August feast does not appear on the calendar as a red, gold or black letter day? Surely it cannot be a high holy day or any kind of day at all? Nay, but insomuch as the Lord himself dwelleth in a high and holy place, yet also with those who are humble and lowly in spirit, so this singular feast is celebrated by that less choosy tribe of biscuit-eaters who live closer to the ground than we do, wherefore I have made a little post about their biscuits and their history…

Hounds have long been employed as hoovers from antiquity. You may recall the story of the gentile woman in the gospels who reminds Jesus that the dogs were allowed to eat the crumbs of bread that fell from their master’s table, and tender-hearted owners of a medieval stripe frequently conceded far far more by way of tasty snacks. Perhaps the most famous example is that Prioress of Master Chaucer’s acquaintance who kept ‘smal houndes / that she fedde, / With rosted flessh, or milk and wastel-breed’ (trans. the nice bits of the turkey on feast days, and milk and brioche inbetween times.) Hunting dogs in particular were given special care on the advice of authorities like Gaston Phoebus and fed with meat or milk and eggs if sick. For the less pampered pooch, the usual diet of stray crumbs could be supplemented by hardtack and ‘dog-bread’, basically the tougher, staler ends of loaf no-one else could use.

It’s dog-bread that comes closest to the dog biscuits we know today, mass-produced in all shapes and sizes since the nineteenth century. As you can see from the picture above, the classic bone-shaped biscuits are designed for heavy jaw action in a way most human biscuits aren’t. (Imagine the offspring of a water biscuit and a rusk, drenched in turkey fat and shaped like a dental stick. Now chew on that…) Feeling a strange reluctance to sample the biscuits for this particular entry, I begged the assistance of Sir Leofric and Sir Bertram, two Scottish terriers from the Court of King Carados. Here’s how they responded to these bony little treats: 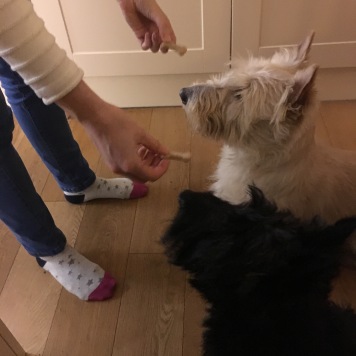 As you can see, the white-haired Sir Bertram seized upon his biscuit almost as soon as it was proffered, while the daintier, dark-haired Sir Leofric employed a gentle caution before wolfing his. Alas, it was no use asking them to describe the taste, but from the amount of tail-wagging that followed I hope it was satisfactory.

From brave Gelert to faithful Argos, beasts and their biscuits may prove tough cookies at a pinch, but their devotion is not to be sniffed at; indeed, the friendship of animals often takes its noblest forms in our darkest hours. Dogs especially are one of the closest friends we have in the animal kingdom, and yet like all species have a life and consciousness different from ours. If we may dare to draw a moral from all this, I would say that just as the delights of the dog biscuit remain remote to humans who do not share a dog’s olfactory and gustatory palate, so we must respect the fact that the lives of animals will always remain remote to us on some level as well. These our ‘brothers from other mothers’ have their own joys and sorrows, and perhaps even their own hymns to God, which we disregard at our peril. Learning how to love and support them must be the work of many lifetimes, but one increasingly necessary for us all to survive and flourish.

More about how dogs around the world are celebrating Dog Biscuit Appreciation Day and how you can support great doggy causes and loyal partnerships near the ground.

Not delectation exactly, but Master Twyti’s farewell to brave Beaumont in T H White’s Sword in the Stone has to be one of the most moving pieces of writing on medieval dogs I’ve come across (although strictly speaking this is medievalism, like The Chronicles of Narnia and Harry Potter, not medieval literature per se). And – just because I like it too – here’s some lovely writing on King Arthur and the animals from The Beast and the Book by Ursula Le Guin.